“To be a philosopher is not merely to have subtle thoughts, nor even to found... read more

“To be a philosopher is not merely to have subtle thoughts, nor even to found a school, but to so love wisdom as to live according to its dictates…a life of simplicity, independence, magnanimity, and trust.” John Porcellino’s graphic novel uses Henry David Thoreau’s own words to recount the time the nineteenth-century American philosopher spent on Walden Pond. It begins with Thoreau’s decision to live in nature, and reveals him writing, thinking, observing, and working the land. It also shows people who stopped by to visit him—he was something of a local tourist attraction in his day—as well as the night he spent in jail for refusing to pay his poll tax, an event that led him to write his famous essay “Civil Disobedience.” Porcellino uses direct quotes from four sources: the book Walden , the essays “Civil Disobedience” and “Walking,” and Thoreau’s own journal. Interspersed among the thoughtful and inspirational text panels are series of wordless panels that reflect the long periods of silence Thoreau enjoyed. In his author’s note, Porcellino remarks that one of the advantages of graphic novels is their ability to show silent introspection in a way that textual narratives can’t. The selection and arrangement of quotations, all meticulously documented, are superb and offer great insight into Thoreau and his writing. (Ages 10–15) 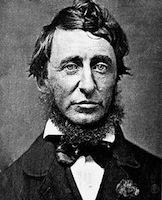