Greg Foley’s accomplished debut picture book is dedicated to “anyone who ever thought they had something great.” His simple storyline follows a small bear whose enthusiasm for the box he has found is tempered by growing uncertainty when each animal he meets responds with either criticism (“I think it’s too small” from Elephant) or dismisses the box—and the bear—altogether (“I’ve seen those before” from Owl). Foley’s brief text is masterful—each simple statement is suited to young children’s understanding of the personality or perspective of the animal that is speaking. His superb illustrations and design are a perfect complement, elegantly spare images that reference and amplify the tone and attitude expressed while poignantly capturing the bear’s increasing sadness. The result is a picture book that shows and reads-aloud beautifully, and a story that is deeply resonant with the emotional landscape of childhood, where enthusiasm is too often dismissed by peers and adults alike. For Bear, and for young readers and listeners, there is sweet and joyful satisfaction in the end: “It’s the greatest thing ever!” says Mouse. Winner, 2008 Charlotte Zolotow Award (Ages 3–7) 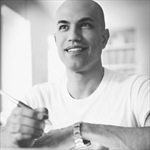