“Didn’t you ever wonder, Iris, what happens to gods when people stop... read more

“Didn’t you ever wonder, Iris, what happens to gods when people stop worshipping them? Where do they go? What do they do?” The mysterious message in the margins of the Bullfinch’s Mythology that Iris Greenwold receives as an anonymous twelfth birthday gift sets the action in motion in Sarah Deming’s witty debut novel. Iris soon discovers that the gods and goddesses are right in her own hometown. Poseidon is the depressed, lovelorn owner of a seafood shack. Apollo is a jazz musician at a club where Dionysus tends bar. Aphrodite owns a spa. Athena and Artemis run a detective agency. Deming deftly balances outrageous humor with insightful revelations about the very human nature of gods and people alike as Iris looks for the reason behind the mysterious message and begins to believe her life is about to change in wonderful ways. The stories from Greek myth woven into the narrative are sometimes a bit long in the retelling, but Deming’s deadpan delivery (“The moto of Erebus Middle School was 'We Y Children.’ This gave Iris Greenwold a funny feeling in the pit of her stomach, which she later learned was called 'irony.’ ”) and hilarious manifestations of the gods and goddesses in modern-day vocations, are a winning combination. (Ages 10–13) 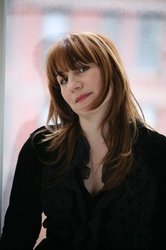