Code Talker: A Novel about the Navajo Marines of World War Two

“Grandchildren, you asked me about this medal of mine.” So begins the... read more

“Grandchildren, you asked me about this medal of mine.” So begins the story of Ned Begay, a Navajo Code Talker who served in World War II. Author Joseph Bruchac uses the strong oral tradition of the Navajo people as a way for his fictional character to pass an important story of culture and pride on to his grandchildren. Ned begins with his life as a child, when he was mistreated and poorly educated in an Indian boarding school run by whites. The message he hears over and over again is “Tradition is the enemy of progress.” He and his classmates are robbed of their culture and forbidden from speaking the Navajo language. But when World War II erupts, the U.S. government realizes the Navajo language offers something invaluable: the basis of an unbreakable code for wartime use. The complexities of the language make Navajo soldiers the best suited for developing and then using the code. Ned becomes one of the first code talkers trained and soon finds himself in the midst of the war in the Pacific. The horrors of discrimination and the harrows of battle are never minced in Bruchac’s honest novel. An author’s note at the end explains more about the real code talkers, whose contributions did not become public until 1969, and a bibliography offers more sources on the topic. (Ages 12–17) 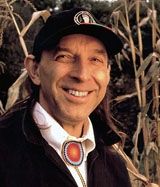