Our Children Can Soar: A Celebration of Rosa, Barack, and the Pioneers of Change

by Michelle Cook, Cozbi A. Cabrera, and A.G. Ford

The work and achievements of ten African Americans are linked together, showing the... read more

The work and achievements of ten African Americans are linked together, showing the powerful cumulative effect of the efforts of many over time, in this singular, inspiring volume. The book culminates with the election of Barack Obama to the presidency, and affirms that achievement as a stepping stone for children today and in future generations. “Our ancestors fought… so George could invent. George invented… so Jesse could sprint… Thurgood ruled… so Barack could run. Barack ran… so our children can soar!” Michelle Cook’s spare text is complemented by double-page-spread portraits of the luminaries named in the narrative, each one created by a different African American artist. A brief paragraph about each individual appears at the book’s end, as does a biographical portrait of each illustrator next to a small picture of the person she or he has depicted. (Ages 6–10) 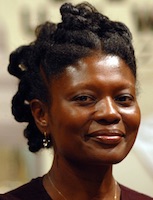 Cozbi A. Cabrera page on TeachingBooks