Escape from Slavery: The Boyhood of Frederick Douglass in His Own Words

This handsomely designed edition is a shortened version of Narrative of the Life... read more

This handsomely designed edition is a shortened version of Narrative of the Life of Frederick Douglass, An American Slave, Written by Himself. Initially published in Boston by the Anti-Slavery Office in 1845, it was the first of Frederick Douglass's three autobiographies. In this edition, the action and events of the longer work are emphasized for young readers. Although the editor reports separating some of Douglass's paragraphs and chapters for clarity in modern times, he says the author's own words, spelling and distinctive punctuation were retained. A helpful introduction provides the context for each section. Eleven black-and-white drawings by McCurdy are interspersed among Douglass's inspiring passages. (Ages 11-16) 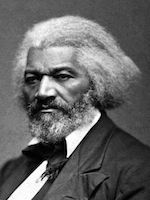