After several botched attempts at creating a world from the stuff lying around in... read more

After several botched attempts at creating a world from the stuff lying around in the boxes and cabinets in their kitchen, Mr. and Mrs. God finally get it right in Nancy Wood’s irreverent, original creation story. After a false start populating their new creation called “Earth” with monsters, they begin to hit their stride. Then Mrs. God’s lovely fish are eaten by Mr. God’s majestic bird. She doesn’t speak to him for one thousand years. (Eventually he makes things right, awing them both with his magnificent whale.) The whimsical ink and watercolor paintings underscore the playful tone of this outrageous story, making the most of both the cooking metaphor and the wonder of creation. The visual presentation of Mr. and Mrs. Gods’ final effort—human beings—can be seen as taking a poke at both evolutionists and creationists or, alternately, as embracing both visions in a mischievous story that will appeal to ages far beyond the typical picture book audience. (Age 6 and older) 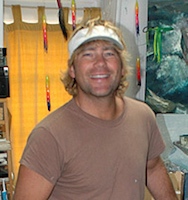