Mrs. Chicken and the Hungry Crocodile

“What a pretty chicken I am!” says Mrs. Chicken as she’s bathing... read more

“What a pretty chicken I am!” says Mrs. Chicken as she’s bathing in a puddle one morning. The puddle is too small for her to see her wings, so she heads for the river to admire them. Mrs. Chicken doesn’t know that Crocodile is waiting just beneath the surface to snap her up—and snap her up she does. “Bok!” Crocodile drags the alarmed Mrs. Chicken back to her lair to eat her. But Mrs. Chicken knows how to keep her head in a crisis, and she enacts a drawn-out plan to convince Crocodile they are really sisters, eventually achieving a masterful escape. This delightful, humorous tale comes from the Dan people of Liberia and was told to co-author Won-Ldy Paye by his grandmother when he was growing up. Julie Paschkis’s wonderful stylized illustrations are set against bright white when Mrs. Chicken is in her own element on land and bold black when she’s in Crocodile’s deep dark lair. In each instance her choice gives the characters’ vibrant visual presence on the page. Honor Book, 2004 Charlotte Zolotow Award (Ages 4–7) 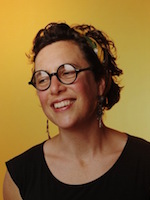 Blog for Julie Paschkis: Books Around the Table