A passionate naturalist from childhood on, William Beebe was hired fresh from college... read more

A passionate naturalist from childhood on, William Beebe was hired fresh from college as assistant curator of birds at the New York Zoological Park. While traveling to remote destinations on scientific expeditions in the early 1900s, the ecologist attempted “the often risky approach of observing animals in their natural habitat” rather than following the standard practice of collecting specimens to bring back to museums and zoos. Frustrated with unsuccessful attempts to raise deep sea creatures to the ocean surface for study, Will Beebe collaborated with engineer Otis Barton to design a deep-sea diving vessel. The Batyhsphere enabled Will and Otis to observe previously unknown animals in their own habitat. This picture book biography captures the passion and dedication of Will Beebe’s life work, highlighting how a childhood interest remained steadfast through adulthood, even as his growing knowledge and experience shifted the focus of his research and made him an early advocate for species preservation and conservation. The rich colors and lush settings of the illustrations transport readers to the naturalist’s many work sites. A glossary, resource list, quotation page, and a section called “Diving Deeper into the Story” round out this accessible biography. (Ages 6–10) 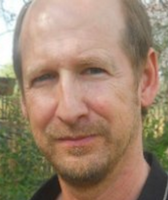