by Margaret Mahy and Jonathan Allen

"...There was once a boy called Norvin who was a good actor but rather plain. In... read more

"...There was once a boy called Norvin who was a good actor but rather plain. In fact, he looked very like a shark. He had small sharkish eyes, a pointed sharkish head, and sharp sharkish teeth. Unfortunately, there are not many plays written with good parts for sharks, so Norvin took up swimming instead..." Aggravated because he has to share Caramel Cove with other swimmers, Norvin clears the beach after strapping a homemade dorsal fin around his substantial middle and "shooting through the water like a silver arrow..." When the real sharks are also fooled by Norvin's splendid performance, his shark impersonations end abruptly. Mahy's playfulness with an image she has also used in writing about her writing is a tribute to her inventiveness. Allen's hilarious full-color images of Norvin are perfectly bizarre. (Ages 4-9) 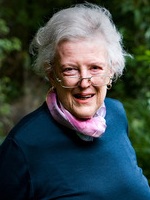