A Group of One

Both of Tara’s parents were born in India, but the 15-year-old has always thought... read more

Both of Tara’s parents were born in India, but the 15-year-old has always thought of herself as Canadian and bristles when anyone tries to label her based on her heritage. Then her neatly packaged view of herself and others is challenged by a visit from her paternal grandmother. It’s the first time Tara has met Naniji, whom she knows only from photos and vague stories about her involvement with the Quit India movement to end British rule of India. Aware of tension between her mother and Naniji, Tara is angry when she hears the story her mother reluctantly tells about feeling scorned by Naniji because her own parents left India for the West and because she doesn’t follow many traditional customs. Tara is prepared to keep Naniji at a distance. But in spite of herself, Tara is interested in what Naniji has to say. When Tara interviews her grandmother for a class assignment, Naniji tells the harrowing story of her 14thbirthday, when British soldiers stormed her home and arrested her brother and mother. In writing the experience to share in her class, Tara feels, for the first time, a deep connection to her heritage. She also senses a profound awareness of her own brown skin and a perception of herself as “other” as she thinks about her mostly white classmates, who will be listening to the story. A lively, likeable, very human protagonist and her family are at the heart of Rachna Gilmore’s honest and deeply probing novel. (Age 12 and older) 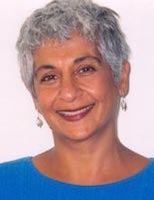