by Sonya Hartnett and Ann James

Hannah has named her hands Sadie and Ratz and given them their own personalities.... read more

Hannah has named her hands Sadie and Ratz and given them their own personalities. It turns out they aren’t very nice, often terrorizing Hannah’s four-year-old brother, Baby Boy. Baby Boy gets his revenge when he starts blaming Sadie and Ratz for every misdeed he commits, resulting in Hannah’s immense frustration. “A horrible thought came into my head. Maybe Sadie and Ratz would have to change. Maybe the only way to stop Baby Boy blaming them for everything was to tame them and make them nice.” Instead, Hannah sends Sadie and Ratz on vacation. When irrefutable evidence shows Sadie and Ratz are innocent of the latest offense (a broken clock), Baby Boy holds up his hands to reveal the true culprits: Colin and Scraps! With refreshing honesty, Sonya Hartnett acknowledges the deep and not always delightful feelings between siblings, as well as the wilds of children’s imaginations, in an edgy, funny novel for newly independent readers. Ann James’s black-and-white illustrations dramatically reflect the story’s emotional tenor, which gradually brightens as Baby Boy equalizes the relationship. (Ages 6–8) 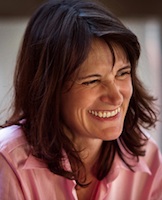