Four hundred years in the future, the South American city of Palmares Três (in... read more

Four hundred years in the future, the South American city of Palmares Três (in what is now Brazil) is a tiered wonder dependent upon technology to function. Every year, the people vote for a Summer King, a young man who marks the next Queen with his blood when he’s sacrificed in Winter. June Costa and her best friend, Gil, are supporters of Enki, a teenage boy from the Verde, the lowest level of Palmares Três. Enki wins and at his first public appearance he and Gil fall in love. June is jealous at first—she has a crush on Enki—but then discovers Enki is an artist, just like her, and is using his position to draw attention to the plight of the people in the Verde. The Aunties who rule with the Queen are suspicious of new technology and rely on the old and outdated. They don’t want Palmares Três to become like Tokyo 10, where most people are simply data streams, no longer able to live in a body. But Enki has managed to get his hands on new tech—body modifications that have allowed him to tap into the city’s central nervous system. This is how he creates his political art, and June becomes his eager partner. Then she finds out she’s one of ten nominees for the Queen’s Award, and she must choose what’s more important—trying to win the award, which guarantees her future, or creating art that is true and meaningful. A vividly drawn, sexually frank novel exploring the importance of connection and things that make us human and whole is full of complex, surprising characters whose relationships are as complicated and changing as real life. (Age 15 and older) 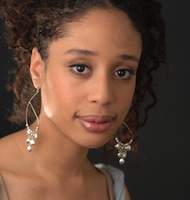