Aman and his mother are Afghan refugees in England illegally. Now, six years after... read more

Aman and his mother are Afghan refugees in England illegally. Now, six years after arriving, they’ve been arrested and are being held in the Yarl’s Wood detention center, awaiting deportation back to a country where they will not be safe. Aman’s best friend from school is Matt, and Matt’s grandpa, a retired journalist, reluctantly visits Aman at his grandson’s request. Much of Michael Morpurgo’s novel—and its strongest dimension—is Aman’s story of what happened in Afghanistan as he and his family are persecuted by the Taliban. Although dogs as pets are counter to Aman’s culture, the boy feels a connection to a stray, injured dog he finds while they are living in a cave. That dog, trained to sniff out IEDs, has been separated from British soldiers, and when Aman and his mother decide to flee, the dog is both their protector and, at times, guide. When they end up meeting the unit to which the dog belongs, the soldiers do what they can for Aman and his mother, but eventually the two are on their own again. The ending of this tale that underscores the plight of Afghan refugees may stray a little too much toward wish fulfillment, but readers will appreciate the message that speaking out against injustice can make a difference, while myriad details ground the rest of the telling in realism. (Ages 9–12) 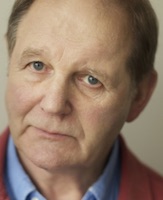