Captivated by airplanes from childhood, eight-year-old Betty Skelton sent letters to manufacturers requesting information because "my father wants to buy an airplane." She studied the pamphlets that arrived, and by age twelve was flying by herself, although "It wasn't quite legal then so I couldn't tell anybody," she later recalled. At sixteen she had a pilot's license, but couldn't become a commercial pilot according to the gender constraints of the 1940s. Instead she became a stunt pilot and broke altitude records before retiring in the 1950s. Betty's passion for flying was transferred to race-car driving, and then boat jumping. She successfully trained to return to the air as the first female astronaut with the Mercury 7, but NASA did not include her in the final crew. Although the text glosses over some relevant details (just how did young Betty learn to pilot?), it captures her relentless energy and drive, as do the lively acrylic paint illustrations. (Ages 4-8) 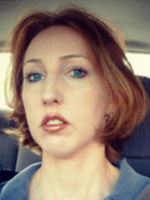