A young, brown-skinned boy's eager anticipation of snow is beautifully drawn out over the course of a day that occasionally tests the patience of his mom, not to mention her skills in the art of distraction. "Do you think it will snow taller than the grass?" "Is it going to be a big snow?" David's questions always lead his mom to suggest another activity to keep him occupied. He helps her make cookies, but the flour reminds him of snow. He helps clean the bathroom, but the suds remind him of snow. He helps make the bed, but those cool, white sheets remind him of snow. Checks of the weather mark the progress of the storm, which is described in terms of his latest activity. "The snow was covering everything, white and cool." After lunch comes a nap, when the snow falls so hard and so fast that it blows in the door, covering floor and furniture in deep drifts that disappear when his dad arrives home, waking David from his dream. But the big snow has transformed the world. Jonathan Bean's lyrical, skillfully crafted picture book is a playful yet realistic look at a memorable day in the life of a young child. Highly Commended, 2014 Charlotte Zolotow Award (Ages 2-5) 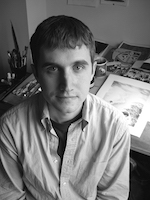