Nim and the War Effort

by Milly Lee and Yangsook Choi

The story concerns a typical World War II school project, a newspaper drive with a contest to see which child can collect the most paper. During a last minute scramble, Nim confronts a white, male classmate who claims an "American" will win the contest. Nim wins, but according to her family's values, she also loses. The paper drive is only one of the ways Nim and her public school friends in San Francisco aid the war effort during World War II. Her family is also part of the war effort but they do not want to be mistaken as Japanese. Nim learns Cantonese at home, practices calligraphy lessons and attends Chinese school in the late afternoons. The home effort of these war years is carefully detailed within a Chinese American context in a relatively long illustrated narrative filled with smoothly incorporated historical and cultural details. Lee raises several issues regarding patriotism, national pride and culture. (Ages 7-10) 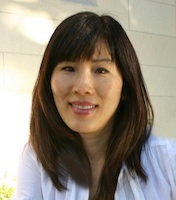