ABCs from Space: A Discovered Alphabet

Twenty-six satellite images of Earth from space reveal the letters of the alphabet... read more

Twenty-six satellite images of Earth from space reveal the letters of the alphabet in their natural or man-made formations. Clouds, rocks, rivers, roads, and even the tracks of ships when seen from far above the earth are among the photographic subjects. While most of the letters are easy to spot in the full- page photographs, the end matter provides thumbnails of each image with the alphabet letter superimposed. The thumbnails are accompanied by additional information about each photo, including where it is located on Earth, the date it was taken, which of four orbiting satellites took the image, and whether the image is natural-color (light visible to the human eye) or false-color (capturing light both visible and invisible to the human eye). A world map showing the location of each image (identified by letter), and two FAQs—one on satellite images and the other on the science related to some of the natural formations— round out this unexpectedly captivating work. (Ages 6-10) 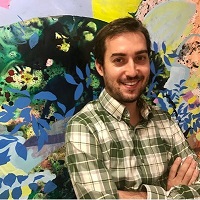