Ever wonder where all that lost luggage ends up when no one claims it at the end... read more

Ever wonder where all that lost luggage ends up when no one claims it at the end of a flight? Unclaimed Baggage is an eclectic resale shop in a small Alabama town. The work of unpacking and inventorying lots of unclaimed luggage purchased by the store is shared among three teens. Doris is a liberal feminist floating in a sea of conservative Christians; Grant is a former star athlete whose out-of-control drinking resulted in a very public fall from grace; and Nell has just moved to Alabama from Illinois, reluctantly leaving her boyfriend behind. Over the course of the summer, Doris and Nell support one another as friends and as young women, and do their best to help Grant, who struggles to abstain from alcohol and to forgive himself for the poor decisions he’s made. While Grant struggles to recover, Doris misses the guidance of her kindred-spirit aunt, who recently passed away, and Nell must confront her white privilege when her biracial (Black/white) boyfriend comes to visit. Although the lessons in racism may feel a bit forced toward the end, this entertaining novel excels at exploring the value and necessity of friendship among teens. (Age 13 and older) 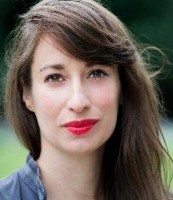