A young girl cycles to various Beijing landmarks as she searches for her lost cat... read more

A young girl cycles to various Beijing landmarks as she searches for her lost cat in this colorfully illustrated story. The white cat appeared in the girl’s tree on New Year’s Eve, and the two became inseparable. In Beihai Park, they shared candied haw fruit. In Tiananmen Square they enjoyed the kites at the Dragon Boat Festival. But when Kitty chased the huge dragon kite’s tail, she was lifted into the air and disappeared. Devastated, the girl cycles the city, checking all of Kitty’s favorite places: The rowboats at Beihai Park, the Temple of Heaven, artists’ workshops and antique shops on Liulichang Street. Returning to her neighborhood, the girl hears Kitty’s “Niaow-niaow!” and finds her white cat stretched across the feet of an elderly woman, who has decided to name her Angel. The girl offers to visit the woman and Angel often; without claiming ownership she selflessly accepts that Kitty has moved on to provide comfort and companionship for another. (Ages 3–7) 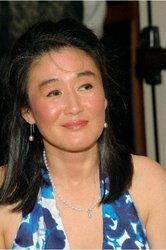