When Everybody Wore a Hat

“In 1916, when I was eight years old, there were almost no electric lights,... read more

“In 1916, when I was eight years old, there were almost no electric lights, cars or telephones—and definitely no TV.” With the opening sentence, the late William Steig plants the contemporary reader firmly into the community of his childhood. Growing up in the Bronx during World War I, Steig heard his parents talk (and quarrel) in four languages—German, Polish, Yiddish, and English. His family moved often, got house calls from their doctor, but never went to his office or a hospital, and occasionally received “sad news” from the Old Country. Concise sentences reflect the items that took hold in an eight-year-old’s memory: “For a nickel you could get a lot: a hot dog sandwich from a stand. A pound of fruit. A movie. And two movies if you sat in the same seat.” Far from being bogged down in nostalgia, both text and illustrations have a decided edge and dry, understated humor. (“Everyone wanted his picture on a horse....Cameras were very big then, and you had to stay very still. This was hard for the horse.”) A longtime, prolific contributor of cartoons and cover art to the New Yorker magazine, as well as a prominent creator of books for children, William Steig died last year the age of 95. His final picture book offers a glimpse of an earlier time, filtered through his observant and witty perspective. It was a time when “there was no such thing as a hatless human being. Cops had hats. Criminals had hats. Even monkeys.” (Ages 6–10) 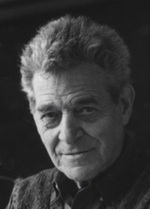