Revenge of the Witch

Thomas Ward is the seventh son of a seventh son—a position often associated with an aptitude for the supernatural. Being the seventh son also means that his father has nothing left to give as an inheritance, and the twelve-year-old must find a trade. With few available options, Thomas becomes an apprentice to the Spook. An intimidating, shadowy man, the Spook has the important, if feared, job of ridding the countryside and villages of pesky “ghouls, boggarts, and all manner of wicked beasties.” Leery, but intrigued, Thomas leaves his farm home to learn a new way of life, which at the very least will be “much more interesting than milking cows and spreading manure.” He’s soon plunged into peril involving a malevolent witch and her niece, Alice, who offers friendship one moment and betrayal the next. As he attempts to balance his ideals with his new knowledge, Thomas worries about the short-lived apprentices who preceded him. Will he be next to die? Confronting one threat after another, Thomas struggles to overcome his realistic fear with instinctual cleverness and deep-seated bravery. The fast pace and well-designed pages with occasional illustrations will have readers racing through this coming-of-age story that feels just right for the audience: not condescendingly mild, nor gratuitously gruesome; rather, a rewarding mix of humor, action, and chills. (Ages 10–14) 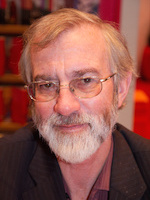 Created by The Art Department