Shug is having a hard time adjusting during that critical summer between elementary... read more

Shug is having a hard time adjusting during that critical summer between elementary and middle school. Her best friend Mark’s “boyness” has never been a problem before, but suddenly she begins to notice him in a new way. She even thinks he might be cute. Her mother drinks too much, possibly as a way to escape what she perceives to be the lack of sophistication of their Southern town, and her father’s business trips are becoming longer and more frequent. Even her older sister seems to be changing, becoming a little meaner and more exclusive. Each of the characters in this novel is well developed and has his or her own angst at this transitional time, even if Shug is not always aware of it. Her best friend Elaine is the only Asian American kid in school and deals with racism that Shug doesn’t even notice. Jack, the boy she is forced to tutor, turns out not to be the dumb redneck kid she thought she hated. In the end, few external problems are resolved, but Shug grows up just enough to learn to deal with the family and life she has. (Ages 11–14) 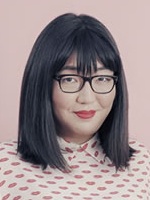 Part 1 of Interview with Jenny Han

Part 2 of Interview with Jenny Han